ABOUT US
Electrical Distribution and Automation Systems

The company ART SYSTEM Srl is located in Annicco (CR), via Giovanni XXIII no. 9, and has worked in the field of electrical distribution and automation systems since 1989.

It moved to its new site in the city’s industrial area in 1997. It is a large and functional building with an adjoining workshop for the assembly and wiring of electrical panels, as well as technical and administrative offices.

The headquarters were enlarged in 2015, bringing the production area to 800 square metres.
This important step forward was made possible thanks to the company’s continuous development in terms of increasingly qualified production and a growing clientele. This development has also led to a gradual increase in permanent staff, counting on about twenty employees included skilled labourers, technical programmers and clerks.

From an operational point of view, starting from projects supplied by the customer or studied and proposed by the company’s technical department, ART SYSTEM deals with the assembly of the numerous components that form an industrial process command and control system, leveraging partnerships with specialized component and instrumentation distributors, choosing the best suppliers on the market.

ART SYSTEM obtained the UNI EN ISO 9001 and Vision 2000 quality certifications in 2003; its production spans across the wide range of process and system automation of industrial machines in various sectors.

ARTSYSTEM designs and manufactures electrical panels and electrical energy and lighting distribution systems with their relative components and electrical command and control devices. They are requested by customers involved in any type of activity, both artisan and industrial.

ART SYSTEM joined the world of photovoltaics in 2008, immediately proving its quality and willingness to help customers, all at ever competitive prices.

ART SYSTEM then joined the domotics market in 2009, immediately seeking collaborations with major manufacturers and distributors for the centralization of residential and industrial environments.

This allowed the company to acquire the skills necessary for the development of system engineering, particularly addressed to the tertiary sector such as large and paramedical offices like clinics and nursing homes.

The adoption of a quality management system was a strategic decision. The design and implementation of an organization’s quality management system is influenced by different needs, specific objectives, the type of products supplied, the processes used and the structure of the organization. Quality systems consist of assessing how and why things are done, describing how they are performed and documenting their results to show that they have been done.

This international standard promotes the adoption of a process approach in the development, implementation and improvement of the quality management system’s effectiveness, in order to increase customer satisfaction by observing the same customer’s requirements.

UNI EN ISO 9001:2000 (Vision 2000) came into force on 1 January 2001, representing the evolutionary phase of the family of ISO 9000 standards on which Quality Management Systems are based. The most significant peculiarities of Vision 2000 are process approach, greater attention to effectiveness/efficiency indicators and surveys for checking customer satisfaction.

ART SYSTEM collaborates with COSMO ITALIA S.r.l. for mechanical design and construction, therein forming Profea S.r.l.
Profea is an engineering company able to design and build systems and units for heat treatment and the handling of food liquids. 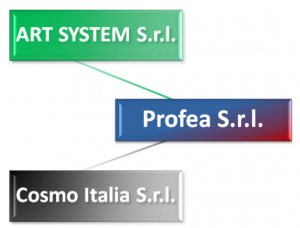